A veteran police chief in Illinois was fired on Wednesday after he posted a meme criticizing “looters” that many found to be in poor taste. Thomas Scully spent the last 15 years as police chief for Orland Hills and found himself without a job when town officials decided the Facebook post warranted him being terminated.

Given Scully’s friendly reputation around Orland Hills, the town released a statement saying, “We hold all of our public officials to the highest standards in their personal and professional lives in Orland Hills. This social media post is in incredibly poor taste.” The statement went on to say, “It does not reflect the values of the people of our community, and we will not tolerate such behavior from any of our public officials.”

The meme in question featured below is a social commentary on the rioting and looting that has ripped through cities across America. Underneath the looters is the caption, “Looting. When free housing, free food, free education, and free phones just aren’t enough.” 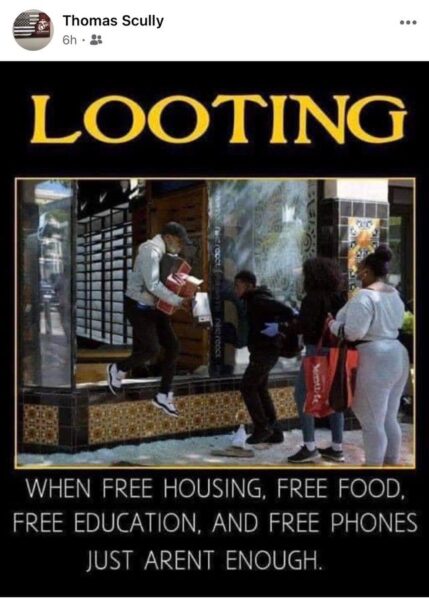 Scully is the latest among officials to be fired over a post. Back in August, a Maryland governor staffer was let go when they posted support for the shooting at the Black Lives Matter protests in Kenosha, Wisconsin. That same shooting resulted in the killing of two protestors with the shooter claiming self-defense.

The post by the staffer showed a police officer smiling with the caption, “Don’t be a thug if you can’t take a slug.” Another post by the same person read, “When you see a skateboard wielding Antifa chickens*** get smoked by an AR toting 17-yr-old.”

As for the town of Orland Hills, officials say the deputy chief will take command until a permanent replacement can be hired.

Oh, poor babies couldn't handle the truth? And that's exactly what that post was. I hope he stands by it.