It will be pervasive.

The deceased weren’t cold yet before leftists tried to distract America from the fact that Noah Green, Friday’s Capitol Hill killer, was a follower of and donor to Louis Farrakhan and the Nation of Islam. Yup, a whitey hating antisemitic lunatic was the ideological motivator behind this attack. So much so that Green referred to Farrakhan as “Jesus.”

NYT: “The suspect in the death of a Capitol Police officer described himself on Facebook as a follower of Louis Farrakhan, the leader of the Nation of Islam, who has repeatedly promoted anti-Semitism. The suspect, Noah R. Green, 25, was identified by two law enforcement officials and a congressional official. He was from Indiana and died after being shot by the Capitol Police. On Facebook, Mr. Green had posted speeches and articles written by Mr. Farrakhan and Elijah Muhammad, who led the Nation of Islam from 1934 to 1975, that discussed the decline of America. Two law enforcement officials confirmed that the Facebook page, which was taken down on Friday, had belonged to Mr. Green.”

Give the New York Times credit for stating the facts plainly. No doubt some of their fellow leftists will try to obfuscate. Rep. Ilhan Omar speculated on the need for more gun control, even though Green was only carrying a knife. 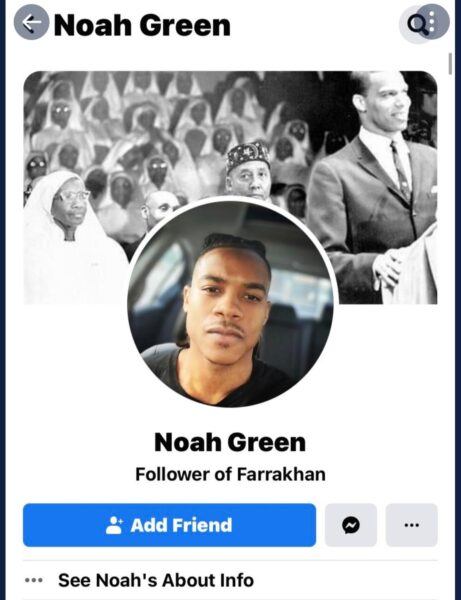 That was widely circulated immediately after the attack. But predictably, it elicited this reaction from the left. 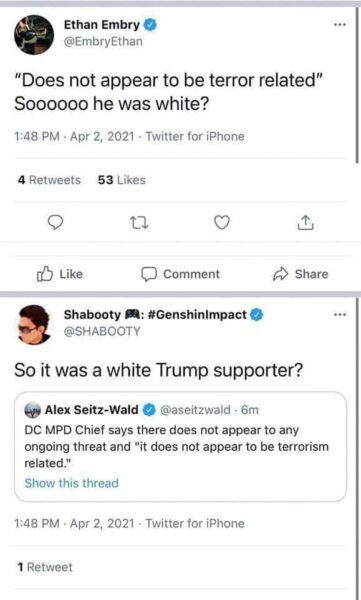 This knee-jerk reaction, this hatred of whites, this pathological obsession with Trump, overshadows anything and everything the left does. Soon, they’ll be blaming a weather phenomenon on the evil whites. Oh, what am I saying? A Washington, DC, Democrat city councilman blamed it on the Jews several years ago. So, guess that one’s taken.

In a survey of several news outlets I found the “he was a quiet sensitive boy” cliche running amok. It seems to be a staple of modern news coverage that the more tragic the murder the quieter the killer seemed to all around him.

In the days ahead we will no doubt hear how this lone wolf Nation of Islam murder requires the Capitol to remain sealed off inside a military perimeter. We will hear how Green was “misunderstood” and how he was mentally unwell and thus no ideology is responsible for motivating him to commit murder. Those will be lies.

Noah Green is the product of a pernicious racist anti-Western ideology that hates the West because of our freedoms and seeks to replace those liberties with a dark twisted Islamist regime of totalitarian control and religious fanaticism. All the leftist distractions and media spin in the world will not change that one iota. Not one.

This piece was written by David Kamioner on April 3, 2021. It originally appeared in LifeZette and is used by permission.

Read more at LifeZette:
McCarthy Nails Down Another GOP House Seat
McCarthy Addresses Allegations Against Gaetz – ‘We Would Remove Him From Judiciary Committee’ If They’re True
Gretchen Whitmer Whines About Sexism In Michigan Capitol As Her Scandals Continue

Rand Paul Blasts Fauci For Acting Like A ‘Petty Tyrant’