One look at Biden's "ear" in this official photo, has caused a huge stir online...

There always seems to be something “odd” going on with Joe Biden.

Whether it’s one of his goofy unintelligible speeches, creepily touching kids, or him doing or saying something to offend or embarrass the county, Joe Biden is a bottomless pit of blunders and cringeworthy moments.

But besides all of that, I’ve noticed a lot of speculation surrounding Joe himself, in terms of his photos, and videos.

There are a lot of people out there who are very suspicious of Joe Biden, and for good reason in some respects. Let’s face it, whether the media will admit it or not, Biden’s cognitive abilities are skidding out of control as the day’s prod on.

But one conspiracy theory I’ve seen floating around A LOT is that people think the “real” Joe Biden has been dead for years and this “Joe Biden” is an imposter.

Now, that’s a bit much for me, I gotta be honest.

Sadly, this Joe Biden is the same ghastly Joe Biden that’s been in politics for some 47-long-miserable-years.

Has he had plastic surgery to look younger?

You can actually see the face-lift scaring on his face. This isn’t a shock, nor is it odd for any public figure to get work done to look “younger”…especially when they’re as old, frail, and sickly-looking as Joe Biden.

But these imposter theories have sparked a great deal of chatter whenever a “strange” photo pops up.

And that’s exactly what brings me to this next story. It’s another bizarre photo of Joe Biden, and it was a photo taken by a Getty Images photographer, and yes, it’s real. I checked it out.

The photo looks to be from the 9/11 ceremony in New York City.

It shows Joe Biden in a crowd of people pulling his mask down and “laughing,” which is weird, during such a somber ceremony, but that’s beside the point.

What’s got everyone taking is his ear. 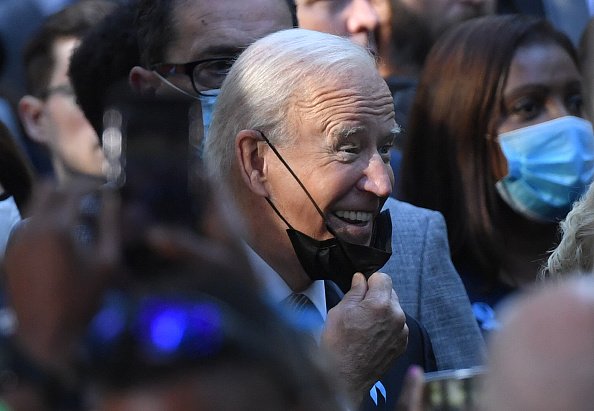 Did you see it?

There’s a “square” piece of what looks to be “skin” just under the strap of his face mask. 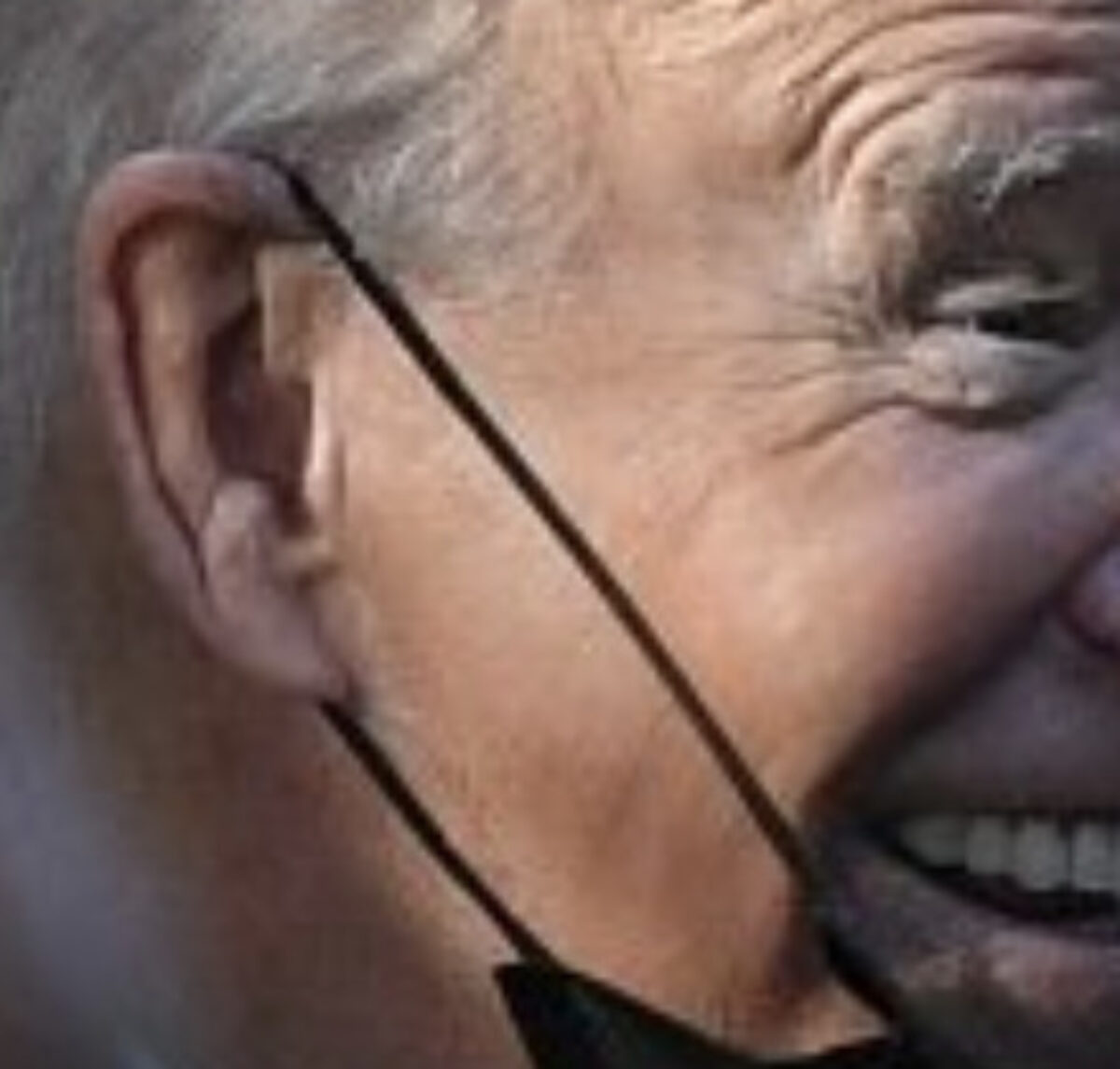 This is a screengrab from the Getty app store, showing the photo is real:

What is that square “tab” exactly? Well, I don’t know – but as a graphic designer who works in photoshop every single day, I’d guess that it was a sloppy photoshop job by the Getty photography team who was possibly “cleaning up” the pic for whatever reason before they put it up for sale.

There’s a tool in photoshop that will make “odd shapes” if it’s not used properly when editing a photo, so that would be my best guess.

And when I zoom in close, I can see the familiar photoshop “smudgy” lines around the square that that particular tool leaves.

However, that’s not what the majority of people believe.

Y’all – what the hell is this?! pic.twitter.com/qAp3SHSI72

Here’s what the bulk of people online are saying about the photo:

“That’s Joe Biden’s mask. Are you all catching on yet?”

“It looks like healing from a facelift. It healed badly on his ear.”

“Too many facelifts? Scar tissue tugging his ear.”

“There’s no if’s. Do you not see the part of the mask literally off the ear and the outline of the make trying to be covered with makeup?”

“The ear is a dead giveaway of a facelift.”

“It helps when removing the silicon mask.”

“It’s makeup tape to pull your face taught and hide the wrinkles. Just a sloppy job of placing the tape.”

“He’s had two surgeries for aneurysms. It’s rarely talked about but those could be the surgery scars.”

“Joe has been dead for three years. That’s just the access tab for the Disney Imagineers to do maintenance on their best animatronic to date.”

Look, I think there are a lot of very bizarre things that are going on with Joe and this entire administration, but “face masks” and animatronic puppets aren’t one of them.

If that was truly the case, then why, in several other photos and videos from that day with that same angle, was there no “square” skin-thingy on Joe’s head?

Did it just disappear?

Naysayers will claim that all other photos of him were photoshopped by the complacent press to “remove the tabs.”

Well, that’s great, except amateur video taken by citizens that day, many who despise him, do not show the “skin tab,” so again, I’m sorry, but that makes no sense whatsoever.

And another thing, I gotta think that if Joe really was an animatronic Disney puppet in a silicon mask, somebody out there would’ve programmed him so he could pump out a coherent sentence once in a while.

Again, I have been doing graphic design for years, and I can tell you with 100% certainty that there are tools in photoshop editing that will create that exact mishap, and it’s happened to me on many occasions when I am editing a photo or creating a meme…most of the time we catch these things, but if you’re in a hurry to get a pool photo out for “sale,” you may be rushing and not notice.

This piece was written by Missy Crane on September 13, 2021. It originally appeared in WayneDupree.com and is used by permission.

WATCH: Senator Cruz Praises Two Democrats For Standing Up To Their “Crazy Party”