With each passing month, it can be incredibly hard to keep up with which crisis America is facing that week. There is the Southern border crisis, COVID-19, the war in Ukraine, the energy crisis, and Roe v. Wade. If that wasn’t enough, Americans are now facing a new problem as parents are struggling to find baby formula as one of the largest suppliers in the country has been shut down for over three months. As families are driving hours away just to be able to feed their infants, Republicans like Representative Cathy McMorris Rodgers demanded that the Biden administration take charge before families find themselves in another crisis.

Speaking to reporters and Americans, as can be seen in the video below, Rep. Rodgers said parents were having to play Russian Roulette when going to the store. “In Washington State, moms, support groups, and nurses have been telling me that this is the biggest crisis that they have faced. As they face the shortage of baby formula, families are turning to the internet because they are so desperate. It is extremely dangerous. You think about moms going to the grocery store and having an empty shelf.

In some cases, they’re driving for hours in order to get the baby formula that they need. And they certainly don’t need to be facing empty shelves. They shouldn’t be rationing formula to keep their babies fed. And some families, they rely upon specific formula. I talked to one mom who has a baby with allergies, and it’s extremely difficult. She feels like she’s playing Russian roulette as she goes to the store.”

The Republican added, “President Biden and the FDA must do more. This is a matter of life or death. What will it take for the Biden administration to reverse its inflation supply chain and energy crises that are making the shortage worse? We need answers, and we need accountability.”

Another member of the GOP, Representative Mike Waltz from Florida, found the baby formula shortage astounding. “I think we need to take a moment and think about the fact that in Joe Biden’s America, it seems like it’s easier to get a crack pipe in a government-funded (Read: Taxpayer-funded) smoking kit than it is to find baby formula.”

As for the shortage in baby formula, Abbott Laboratories, the largest supplier in the U.S., was closed in February after bacteria from the facility were exposed to the formula, causing two infants to die. After a massive product recall, an investigation found that the facility in Michigan was not the source. The factory remains closed.

While the Biden administration has released no plan to help parents feed their children, a meme was presented showing what the government can do. 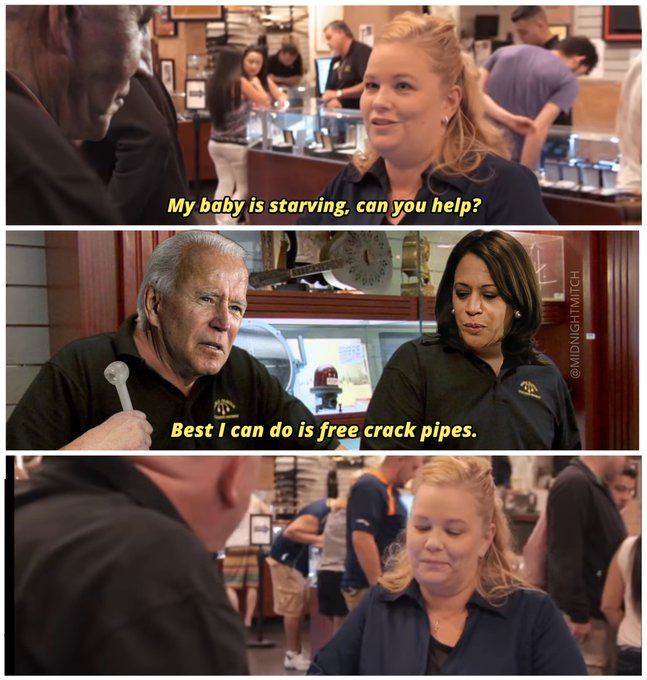 This piece was written by Zach Heilman on May 12, 2022. It originally appeared in RedVoiceMedia.com [3] and is used by permission.