For a convenience store gift card and a scratchy...

HARRISBURG, PA – Democrat Pennsylvania Lieutenant Governor John Fetterman reportedly won the Democratic primary for the U.S. Senate on May 17th, but a new report regarding the aspiring senator alleges that he may have violated state election laws back in 2020 by way of a scheme meant to monetarily incentivize voters to “bank” their ballots.

The outlet 100 Percent Fed Up came into possession of a series of Twitter posts that date back to October of 2020, where it appears as though Fetterman is offering people to be entered into a raffle for a gift card and lottery scratcher if they share proof of them securing their ballot.

Although 100 Percent Fed Up asserted that the “tweets by Fetterman that have been since been deleted,” the offending social media post in question is still live as of this writing.

On October 31st of, 2020, Fetterman wrote, “BANK YOUR BALLOT PA. I want ALL the @’s in my [timeline]. Let’s see you bank them. Monday, Grace will pick the winner of a Sheetz gift card for you to celebrate democracy. And, a P.A. scratch-off to remind you that you can gamble in P.A. but are a criminal if you sip some weed.” 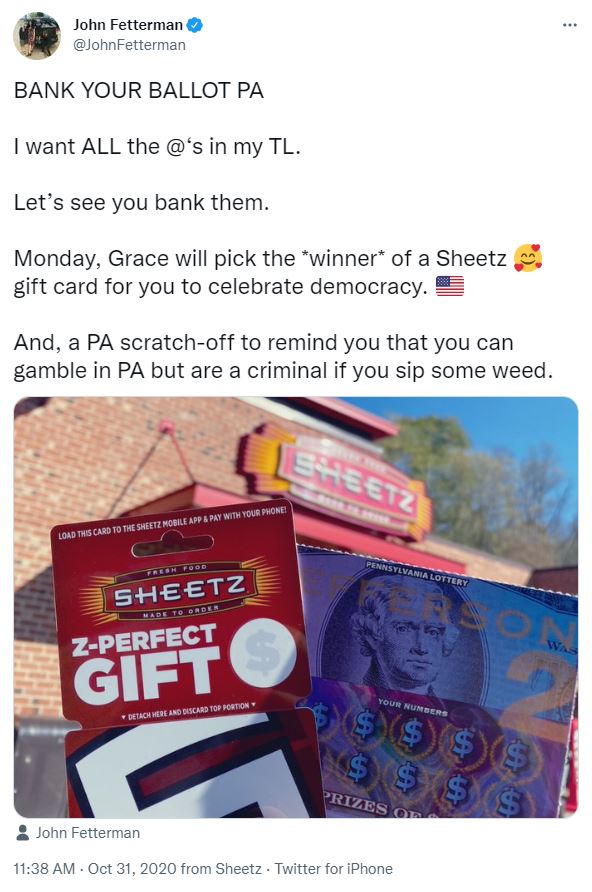 A myriad of individuals replied to the post, with many of them showing evidence in pictures that they had indeed “banked” their ballot in the state. However, some people in the comments section were asking whether or not they could be considered for a Wawa gift certificate instead of Sheetz, to which Fetterman wound up reiterating in multiple replies that the gift card for Sheetz had already been purchased. 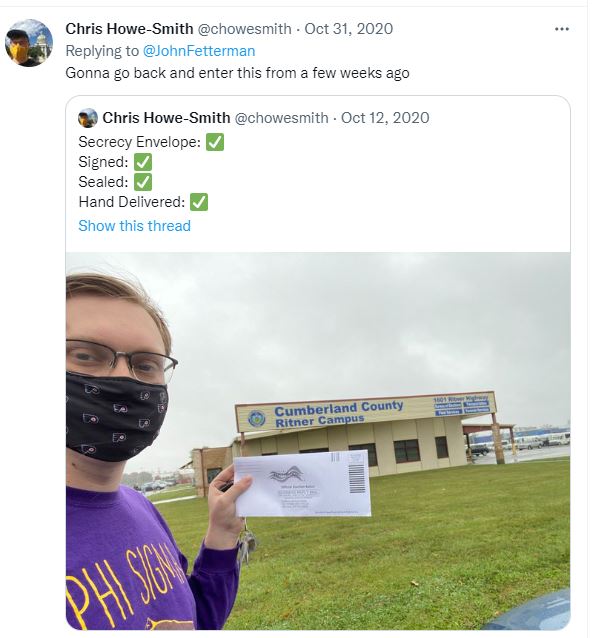 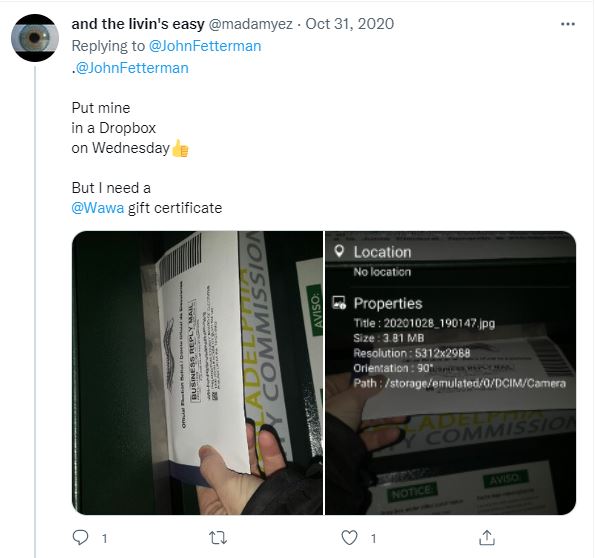 The issue at hand is that entering people into a raffle with prizes of a monetary value in exchange for them to vote in an election could very well violate Pennsylvania state law  Section 3539 – Bribery at elections.

The state law regarding bribery at elections is as follows:

Of course, with respect to the state law in Pennsylvania, there’s an obvious carveout that denotes the bribery must be in reference to a “particular candidate or candidates,” which affords some wiggle room in Fetterman’s case.

But then there is the federal law that touches on this matter, which the aforementioned ballots people were “banking” at the time were, of course, for the presidential election.

According to the Justice Department’s “Federal Election Fraud Fact Sheet,” one section reads, “Paying voters to register to vote, or to vote in elections where a federal candidate’s name is on the ballot (52 U.S.C. § 10307, 18 U.S.C. § 597), or through the use of the mails in those States where vote-buying is a ‘bribery’ offense (18 U.S.C. § 1952), or in federal elections in those States where purchased votes or registrations are voidable under state law (52 U.S.C. § 20511).”

It’s unclear what, if anything, will come of this matter, as there are no reports that circulated at the time of the purported bribery scheme that suggested Fetterman’s actions would be investigated nor have any cropped up since then.

This piece was written by Gregory Hoyt on May 18, 2022. It originally appeared in RedVoiceMedia.com and is used by permission.

I make more then 12,000DLR a month online. It’s enough to comfortably replace my old jobs income, especially considering I only work about 11 to 12 hours a week from home. I was amazed how easy it was after I tried it…….. http://Www.HighPay1.com

[ join us ]
I get paid more than $90 to $400 per hour for working online. I heard about this job 3 months ago and after joining this I have earned easily $21k from this without having online working skills . Simply give it a shot on the accompanying siteS…