It's a pandemic of the vaccinated...

According to a major study by the New England Journal of Medicine published on June 9, the corporate media, Fauci followers, and Big Pharma’s narrative of covid jab efficacy has been proven to be wrong.

The study reportedly collected data from over 100,000 people who had contracted the Omicron variant of Covid-19 and analyzed the information for 300 days.

As reported by the NOQ Report, the study indicated:

The shot is “linked with negative protection,” says the Epoch Times, while 50 percent immunity is offered to those who haven’t received a shot. They further reported, “The authors of the study found that those who had a prior infection but no vaccination had a 46.1 and 50 percent immunity against the two subvariants of the Omicron variant, even at an interval of more than 300 days since the previous infection. However, individuals who received two doses of the Pfizer and Moderna vaccine but had no previous infection were found with negative immunity against both BA.1 and BA.2 Omicron subvariants, indicating an increased risk of contracting COVID-19 than an average person.” 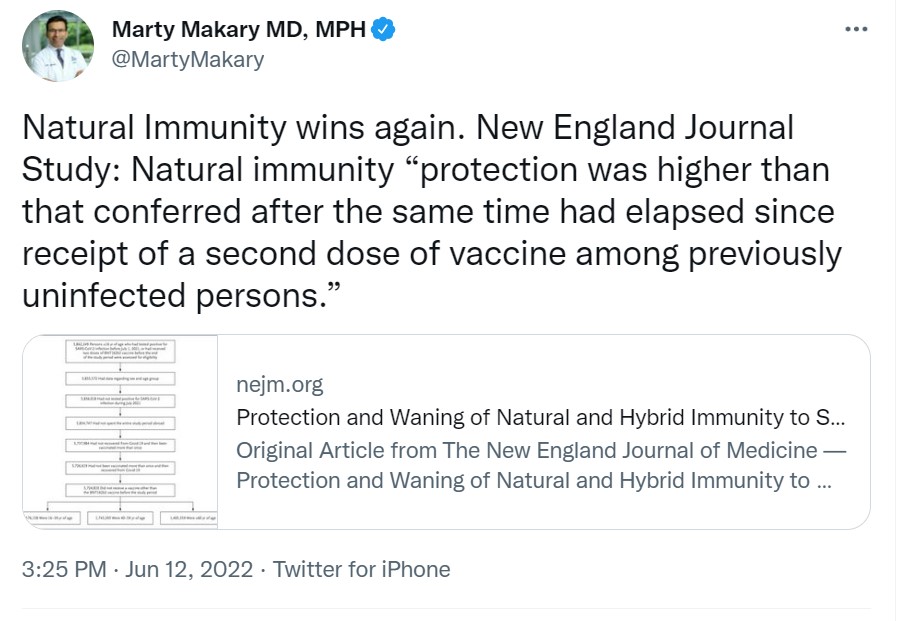 A study by the Government of Canada has also found information that contradicts Big Pharma’s narrative, this time finding that four in every five Covid-related deaths since mid-February 2022 have been from those who have received a shot. Further, 70% of those were triple-jabbed.

Despite these findings, as The Expose pointed out, “Unfortunately, the Government of Canada is attempting to deceive the public by providing a tally of cases, hospitalizations and deaths that stretches all the way back to December 14th 2020. By doing this they’re able to include a huge wave that occurred in January 2021 when just 0.3% of the population of Canada was considered fully vaccinated.”

Red Voice Media reported previously on an April “peer-reviewed study by MIT researchers,” which found that receiving the COVID shots is “significantly associated” with a 25% increase in heart-related medical emergencies for individuals aged between 16 and 39-years old. This study was published in the Nature Journal Scientific Reports, where researchers noted that this uptick in heart-related medical emergencies post-COVID jab “raise concerns regarding vaccine-induced undetected severe cardiovascular side-effects.”

Further, a European study published in the Journal of the American Medical Association in April claimed that instances of heart inflammation requiring hospitalization among those who’d received their COVID shots were higher than those who’d managed to avoid the jab.

According to the study, “In this cohort study of 23.1 million Nordic residents aged 12 years or older, the risk of myocarditis was higher within 28 days of vaccination with both BNT162b2 [Pfizer] and mRNA-1273 [Moderna] compared with being unvaccinated, and higher after the second dose of vaccine than the first dose.

And just in case you’ve been hiding under a rock, the government’s ‘experts’ have been wrong quite a lot…

This piece was written by Leah Anaya on June 21, 2022. It originally appeared in RedVoiceMedia.com and is used by permission.