"They believe the way to 'end racism' is to be racist against the right people. 'Progressives' are setting humanity back entire centuries."

In a video recently shared by Libs of TikTok, a white leftist decided to voice her position on white people getting a tan during the summer months, claiming that if they don’t vocalize their support for Black Lives Matter then they shouldn’t be tanning.

The video shared by Libs of TikTok earlier in June appears to have been originally uploaded in June of 2021 by a TikTok user under the handle “Allegra.Leggie.Legs” who has since made her account private on TikTok.

In a seemingly smug tone while sitting in her vehicle, the woman goes on a brief diatribe about how white people shouldn’t get tan in the summer if they don’t repeat the BLM mantra.

Newsmax contributor and attorney Jenna Ellis responded to the video shared by Libs of TikTok, writing, “They’re so predictable, I was making fun of them years in advance,” where she shared a post she’d put up back in May of 2021 that read, “I’m in Florida this weekend with a pledge to help end racism: tanning, so I can be less white.”

Journalist Kyle Becker shared his own take on the liberal Karen rant, writing, “These people actually believe skin pigmentation determines self-worth. They believe melanin content dictates what we’re allowed to do & say. They believe the way to ‘end racism’ is to be racist against the right people. ‘Progressives’ are setting humanity back entire centuries.” 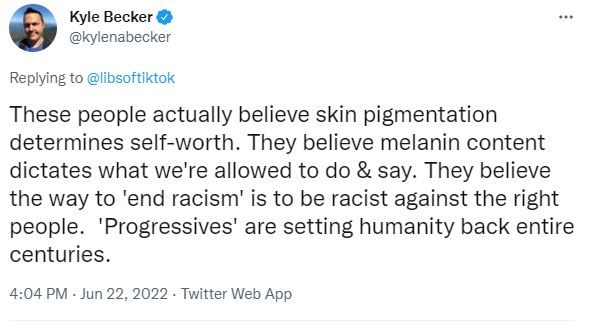 One of the funnier takes regarding the video involved a sort of racial game of hot potato between Twitter users.

One user commented, “The Hispanic community does not claim this lady. We kindly pass her to the Asian community,” which rendered a reply of, “Um fuck no. We respectfully tell the black community to take her ass back.” Apparently, one black Twitter user wasn’t having that, writing, “Hell to the Nah! Ain’t none of us got time for that, give her to the Native Americans,” which landed a response of, “Fuck no she is not ours.” 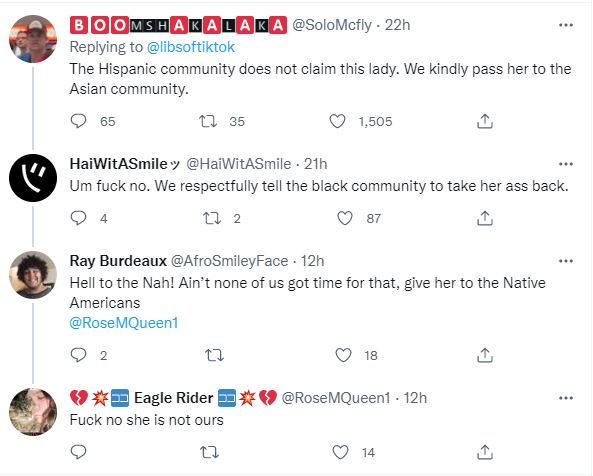 While the above-featured video was great at landing some mocking responses, there is an unsettling number of people today who harbor these sorts of perspectives – in thinking (and vocalizing) that white people can’t/shouldn’t do “X” lest they do something to appease the perennially woke whims of the moment.

And, ironically, these sentiments seem to lie largely within the white demographic of the far-left.

This piece was written by Gregory Hoyt on June 23, 2022. It originally appeared in RedVoiceMedia.com and is used by permission.

My pay at least $300/day.My co-worker says me!I’m really amazed because you really help people to have ideas how to earn money. Thank you for your ideas and I hope that you’ll achieve more and receive more blessings. I admire your Website I hope you will notice me & I hope I can also win your paypal giveaway.
go to this link…………… http://Www.SmartJob1.com

Everybody can earn $500 Daily… Yes! you can earn more than you think by working online from home. I have been doing this job for like a ADt few weeks and my last week payment was exactly 2537 dollars..
🙂 AND GOOD LUCK.:)

I easily make $32,000-$38,000 each month just by doing a simple home business. This job is online and can be done very easily part-time or full-time, although no specific experience is required for this job. Anyone can join this work now and start earning like me.
.
Follow the link. >>>> http://Www.SmartPay1.com

𝗅 𝗀𝖾𝗍 𝗉𝖺𝗂𝖽 over 𝟣9𝟢 USD 𝗉𝖾𝗋 𝗁𝗈𝗎𝗋 𝗐𝗈𝗋𝗄𝗂𝗇𝗀 from home. l never thought I’d be able to do it but my Best friend makes over 18543 USD a month doing this and she convinced me to try. The possibility with this is endless.
Details HERE…. http://Www.NetCash1.com

𝗅 𝗀𝖾𝗍 𝗉𝖺𝗂𝖽 over 𝟣9𝟢 USD 𝗉𝖾𝗋 𝗁𝗈𝗎𝗋 𝗐𝗈𝗋𝗄𝗂𝗇𝗀 from home. l never thought I’d be able to do it but my Best friend makes over 18543 USD a month doing this and she convinced me to try. The possibility with this is endless.