MCHENRY, ND – The 41-year-old suspect accused of killing an 18-year-old over the teen victim’s Republican leanings has reportedly made bail mere days after the victim was allegedly run down by the suspect’s vehicle. The news of the release is particularly unnerving, as authorities say the suspect had already confessed to killing the teen intentionally.

As previously reported, 18-year-old Cayler Ellingson had attended a “street dance” in McHenry during the early-morning hours of September 18th, when authorities say he was fatally struck by an SUV being driven by 41-year-old Shannon Brandt following some kind of political disagreement.

Court documents proclaim Brandt  had called 911 at approximately 2:30 a.m. on September 18th, telling the dispatcher that he’d intentionally used his vehicle to hit Ellingson, reportedly justifying the fatal attack by claiming that the victim was part of a “Republican extremist group,” and that he believed Ellingson had “called some people” whom he thought “were coming to get him.”

At the time of the incident, Ellingson was walking along Jones Street and was apparently aware he was being pursued by Brandt in his vehicle, with the victim calling his mother and asking whether she personally knew the individual chasing him. Ellingson’s mother apparently did know Brandt to some degree, but the nature of that familiarity has yet to be shared by authorities.

Brandt was reportedly under the influence of alcohol at the time of the incident and was later arrested and charged with vehicular homicide and leaving the scene of a deadly accident on September 19th. Officials say additional charges could be brought forth as the investigation develops.

In North Dakota, a conviction of vehicular homicide carries a sentence of 10 to 20 years in prison, yet despite the severity of the charges Brandt is facing, his bail was set at a mere $50,000.

At the time of Brandt’s initial court appearance, where bail was set, he objected to the idea of any bail being imposed, telling the judge, “I have a job, a life and a house and things I don’t want to see go by the wayside — family that are very important to me.”

Townhall reporter Mia Cathell confirmed Brandt made bail on September 20th – two days after Ellingson was killed. Cathell further noted that Brandt is apparently “scrubbing his social media” accounts in light of his release from jail. 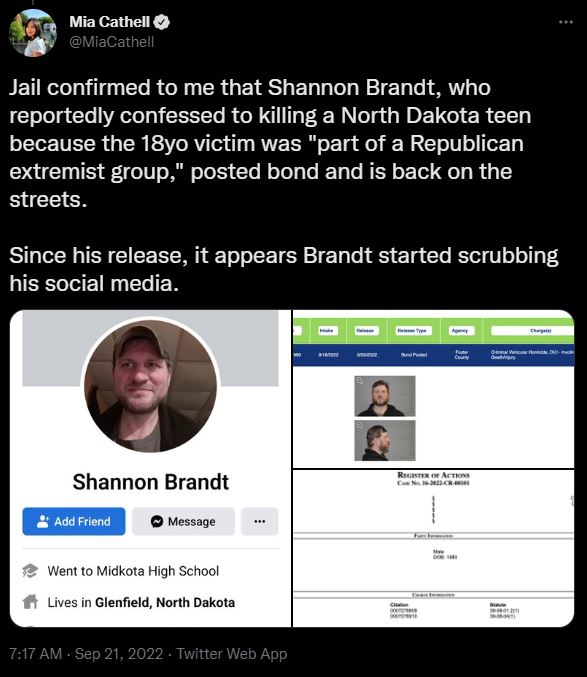 It’s unclear as of this time whether Brandt has obtained an attorney in the matter.

A GoFundMe account that was established to help the Ellingson family with funeral expenses has exceeded $21,000 in donations as of this writing.

Visitation services for Ellingson are slated to be held on September 25th at Evans Funeral Home in Carrington, with funeral services being conducted at Trinity Lutheran Church on September 26th.

This piece was written by Gregory Hoyt on September 21, 2022. It originally appeared in RedVoiceMedia.com and is used by permission.