War, Famine and Disease: The Confluence of Constructed Scenarios Brings Us Closer to Catastrophe and One World Government

How far down this constructed war continuum do we go before the unthinkable happens?

Event 201 was the October 2019 pandemic response tabletop exercise that was conducted by the World Economic Forum, The Bill & Melinda Gates Foundation, and Johns Hopkins. Two months later, COVID-19 broke out. Catastrophic Contagion was a similar tabletop exercise conducted held on 23 Oct 22 by the WHO, The Bill & Melinda Gates Foundation, and Johns Hopkins. Approximately two months later, we saw the emergence of the SARS Omicron XBB.1.5 variant as the most virulent one so far. Food Chain Reaction was the 2015 tabletop exercise for a global food crisis currently underway.

These are all constructed scenarios being forced down our collective throats by an unelected cabal, and those scenarios represent a confluence of dynamic forces bringing us all closer to catastrophe and, ultimately, a One World Government.

As I continue to reiterate, there’s a distinct difference between what is happening to us and what is being done to us.

It’s who is doing it that’s as problematic as it is infuriating. With China as the hammer to all nails and the intelligence community underpinning it all and existing beneath the surface of the geopolitical undercurrent, a cartel of Globalists has infiltrated and hijacked governments worldwide, leveraging the CCP’s technocratic brand of Marxist communism as the enforcement mechanism. Their leadership cohort is Klaus Schwab and his World Economic Forum.

The crime family occupying the White House – for the time being – is the central node to all of it. Just like the Bidens connect to war through their corruption in energy, which I reexamined in this recent article, they enmesh in Ukraine, connecting to biowarfare in Ukraine and the COVID-19 “pandemic” through Metabiota and other means. Moreover, Hunter Biden threads through the ongoing food crisis through UN’s Global Food Program.

What is happening versus what is being done? Failing to discern that distinction arises to a fatal mistake.

Overlaying both the aggregate work in the War, Famine & Disease series and new developments below that further evidence it all is the ongoing meeting of Klaus Schwab’s World Economic Forum in Davos.

In a recent and brief three-post Twitter thread, I noted another vector for another and likely forthcoming global catastrophe designed to put all of us under their thumb with a boot on the back of our necks while relegating us to life on the technocratic global plantation.

The vector for that global catastrophe is a massive cyber attack to put us all back in the Dark Ages. Is this Joe Biden’s promised “Dark Winter?” The evidence would suggest so. Consider:

Do Schwab, the WEF & the Globalists have this in the queue?

Will Schwab’s prognostications foretell another predetermined global disaster to enslave the sheep on the technocratic global plantation?#DarkAges #DarkWinter pic.twitter.com/r1Anewzpaf

Take the time to watch the very brief video above. It delivers ominous details.

I followed up on that thread with this one, which is also worth taking the time to briefly spin through. It’s comprised of details surrounding the trafficking of U.S. classified and secretive information; especially documentation about weapons platforms and systems, that envelops the Penn Biden Center, Joe Biden, Hillary Clinton’s private and unsecured server, and the prospects of surviving a precursory cyber attack followed by a full-on kinetic attack on the U.S. mainland. In short, they’re not good.

With the contextual backdrop established, let’s move on to new developments: 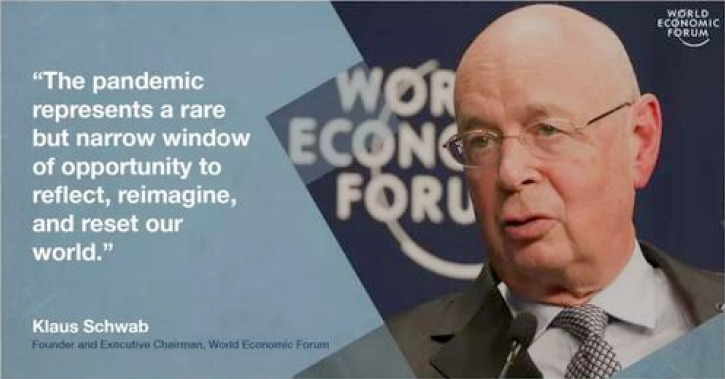 For anyone dismissive of what amounts to an enormous body of excruciatingly detailed work that is all sourced and cited for the purpose of submitting water-tight evidence, consider the following respective to constructed crises designed to relegate us all to life on the technocratic global plantation under the rule of a single cohort of tyrannical, Marxist, communist, Globalist criminals and worse: Davos Attendee Says ‘Quiet Part Out Loud’: Agenda Is To Create A “New World Order”.

I’ve spent much time dedicated to exposing Dynastic Bush and positioning George H.W. Bush as the head of the snake. His objective was clear: establishing a One World Government by means of a New World Order. Consider:

“A Davos speaker explicitly outlined the World Economic Forum’s agenda when he stated that the goal was to create a “new world order.” The remarks were made during the annual elitist confab yesterday by Bilawal Bhutto Zardari, Pakistan’s Minister of Foreign Affairs. “Here at WEF…there’s a lot of discussion about what the new world order will be…how do we work towards that new normative international order that allows us to address our differences and disputes as the civilized world,” said Zardari.” – Paul Joseph Watson, Summit News at Zero Hedge

I often say that there’s a zero percent chance that I’m wrong about COVID-19 being a construct of enterprise fraud. There is no other plausible or rational explanation for anyone with a modicum of common sense and a logical and objective mind.

I feel equally confident about my analysis of the multiple-front war scenario, the food crisis, the energy crisis, and more. The only remaining question is how far down this constructed war continuum do we go before the unthinkable happens?

Unfortunately, I’m not at all confident in the answer to that question or in that particular outcome.

Or better yet, wake up, people, and help yourselves.

This piece was written by Political Moonshine on January 21, 2023. It originally appeared in RedVoiceMedia.com and is used by permission.

The opinions expressed by contributors and/or content partners are their own and do not necessarily reflect the views of DrewBerquist.com. Contact us for guidelines on submitting your own commentary.