Real Americans will tell them to bite it.

There is a new Captain Buzzkill in town and it wants you to know that in spite of close to a year of ridiculous regulations, you better listen to them now, lest you stop and they return to relative irrelevance.

That’s right, the Centers for Disease Control wants to ruin Thanksgiving. Probably not for Bolshie reasons, though you never can count that out. But for the same reasons other bureaucracies across the land want you to curtail your normal activities: Because they really like the power of making you do it.

The boys and girls in Atlanta have come up with such absurd ways to conduct the holiday that one can only stop for a moment and feel sad that long ago a personal holiday trauma (yeah, dad never should have brought his stripper girlfriend to mom’s Thanksgiving so soon after the divorce) made them loathe the day to such an extent they now want to ruin it for everybody else. Well, some Americans just won’t have it. 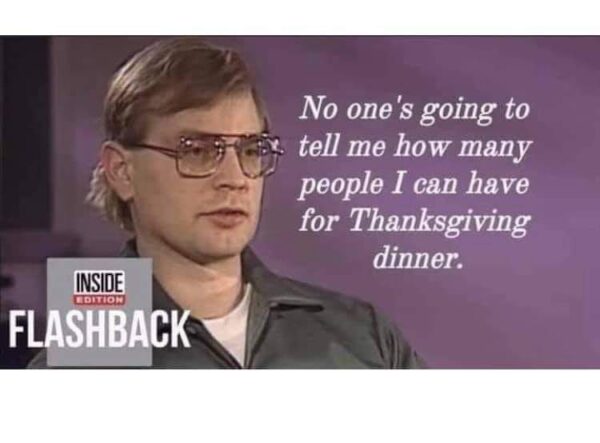 FNC: “If you’re going to a holiday gathering and want to limit your chance of contracting the novel coronavirus, you might have to give up caroling, loud music and alcohol, according to the U.S. Centers for Disease Control and Prevention. In a holiday-focused health and safety guideline published by the agency on Wednesday, the CDC offered detailed considerations people should take if they are hosting or attending a gathering or plan to stay or host guests overnight. These guidelines suggest people modify their holiday activities to minimize the spread of COVID-19.”

The CDC says, “Encourage guests to avoid singing or shouting, especially indoors. Keep music levels down so people don’t have to shout or speak loudly to be heard.” Oh sure, your Marine vet uncle won’t be shouting over a political argument with your 19 year old Antifa cousin this Turkey Day. Perish the very thought. And that Led Zeppelin Thanksgiving album, the one with the 6 minute megadecibel Jimmy Page riff? Not this year.

In the medicos’ own words: “Avoid using alcohol or drugs that may alter judgment and make it more difficult to practice COVID-19 safety measures.” What they don’t understand is that a serious intake of booze is the only way we get through spending that much time with our relatives.

Look CDC, we know in your sad little world of plagues and petri dishes it many be fashionable to get up on your ubergeek soapbox and expect someone to listen to you. Well guess what? We’re not going to. Sending the Thanksgiving Police to raid every home in America? Didn’t think so. Thus, crawl back to your labs and we’ll get on with the day in any manner we see fit. That’s called freedom, and we’re very thankful for it.

This piece was written by David Kamioner on November 19, 2020. It originally appeared in LifeZette and is used by permission.

WHISTLEBLOWER Explains How He Drove Biden Ballots Across State Lines

Pennsylvania Lt. Governor Says Trump Will Get ‘Clock Cleaned’ If He Goes To Supreme Court To Approve Ruling

Hanson Has Wise Words For The President