The Fight Goes On For The President

The president is not giving up.

Though the electoral phase of the election seems over, and the president by his early Sunday tweet recognizes it, he will fight on in the courts to help ensure fair elections in the future. Thus, he will not concede, as this would harm his legal case and public perception.

But to feel, obviously not think, that the president just blithely uttered a statement that Biden won, without giving his words any thought, bespeaks a very low opinion of the president’s judgment and intelligence. Since we here have a high opinion of both, we take the man at his word 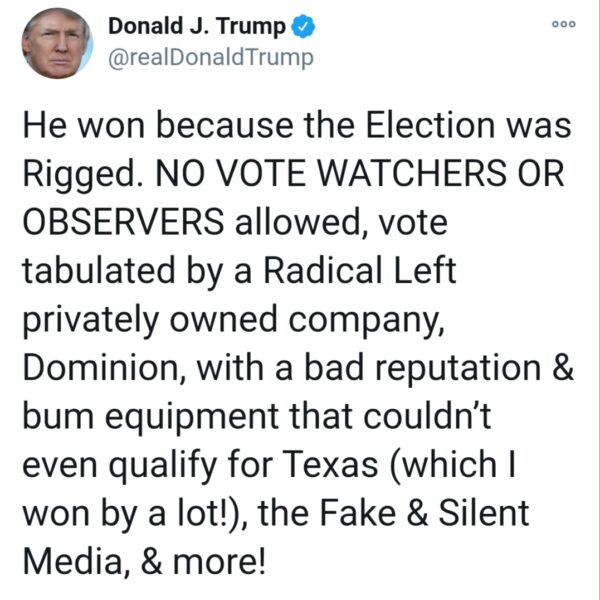 But we know, for this country and for the integrity of future elections, he will fight on. Is there still a faint flicker of a chance in the courts? Yes. But too low a glimmer to bank on. But, he must keep fighting. He will.

He only won in the eyes of the FAKE NEWS MEDIA. I concede NOTHING! We have a long way to go. This was a RIGGED ELECTION!

RIGGED ELECTION. WE WILL WIN!

And yes, the president could win. But not this election. He could pull off a Grover Cleveland and win non consecutive terms in office. Or more interestedly, he could, if he now can be compared to Andrew Jackson in 1824, go for an 1928 gambit.

Jackson had a disputed election blatantly stolen from him by Adams, due to a corrupt deal, in 1824. It went to the House, Henry Clay sold his votes to Adams for a cabinet slot, and Jackson loses in maybe the dirtiest election in American history. Makes this one look like a summer picnic. 1824 has a lot of parallels to today. A lot.

Wiki: “Adams’ victory shocked Jackson, who, as the winner of a plurality of both the popular and electoral votes, expected the House to choose him. Not long before the contingent House election, an anonymous statement appeared in a Philadelphia paper, called the Columbian Observer. The statement, said to be from a member of Congress, essentially accused Clay of selling Adams his support for the office of Secretary of State.”

Jackson gets a rematch with John Quincy Adams in 1828. Both sides go at it even harder than 1824. No quarter asked, no quarter given. Jackson beats Adams and becomes president. Can Donald Trump execute a Cleveland or a Jackson? For the future of this country, let us hope so.

David Kamioner is a veteran of U.S. Army Intelligence and an honors graduate of the University of Maryland's European Division. He also served with the Pershing Nuclear Brigade and the First Infantry Division. Subsequent to that he worked for two decades as a political consultant, was part of the American Red Cross Hurricane Katrina disaster relief effort in Louisiana, ran a homeless shelter for veterans in Philadelphia, and taught as a college instructor. He serves as a Contributing Editor for LifeZette.

Democrats Send Letter To Biden, Asking Him To Hand Over Nuclear Codes

New Scale Shows How Racist White People Are, Check For Yourself