If Jackson Lee’s bill is signed into law, it will become a codified and weaponized tool to further target and vector in on Biden’s political opposition with a corrupt and criminal federal apparatus.

January 9, 2023, marked the day that Rep. Sheila Jackson Lee, D-FL introduced a nefarious bill entitled “Leading Against White Supremacy Act of 2023.” The bill bears a remarkable resemblance to another bill introduced by then-Senator Kamala Harris, D-CA, in 2018 in the sense that it was an anti-lynching bill introduced relative to the fraudulent and dangerous “systemic racism” narrative.

Within Harris’ anti-lynching bill, I identified the vector to introduce slavery reparations, which is now a topic at the forefront of the geopolitical landscape. I extrapolated the evidence in the bill to establish the position that Kamala Harris is going to march us right back to the pre-Civil Rights era. That article can be read here. These extracts are from it: 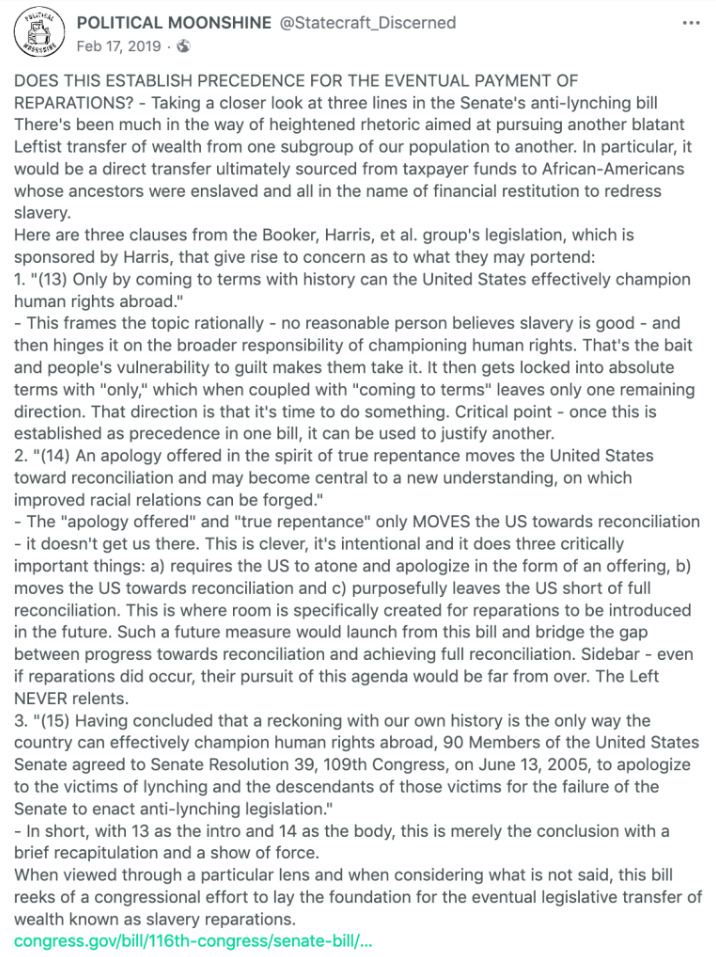 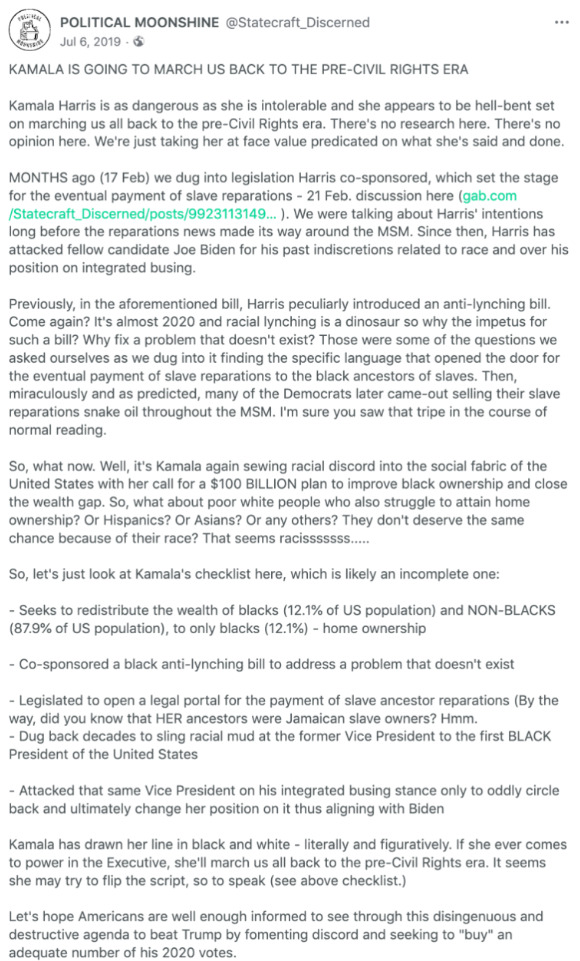 Back in February 2019, I analyzed the Emmett Till Antilynching Act of 2022 in bill form before it was signed into law by President Joe Biden in March 2022. I wanted to examine the need for such a bill in modern times, thinking that it may contain ulterior motives like the discovered introduction of slavery reparations.

Historically, lynching was carried out by Southern Democrats overlapping the Ku Klux Klan and mostly occurring between the 1890s-1920s, although it continued at a lesser rate through the 1950s. The last lynching occurred largely as an anomaly in 1981.

In short, anyone with a modicum of common sense and a basic understanding of factual U.S. history knows that despite what the media may want people to believe [for example, see this, this, and this], lynching is not a modern-day problem in America. So then, why do they continue to pick this scab, and why did Harris introduce an anti-lynching bill signed by Biden just last year?

The short answer is that it applies to an entirely constructed narrative resting on the evidenced components for a plan to target Trump’s base, as I evidence below. Like they’ve turned science on its head, claiming now that men menstruate, they’re turning history on its head since Democrats are the party of racism, slavery, and lynching while Trump’s conservative, the Republican base is the opposite.

Resting on the examination of the anti-lynching bill back in February 2019 to establish the position that Harris would march us back to the pre-Civil Rights era, including the introduction of slavery reparations, just look around you. Furthermore, consider it all through the lens of the post-George Floyd riots that I just happened to accurately project nearly three weeks in advance sans the context, noting they broke out on 29 May 20. 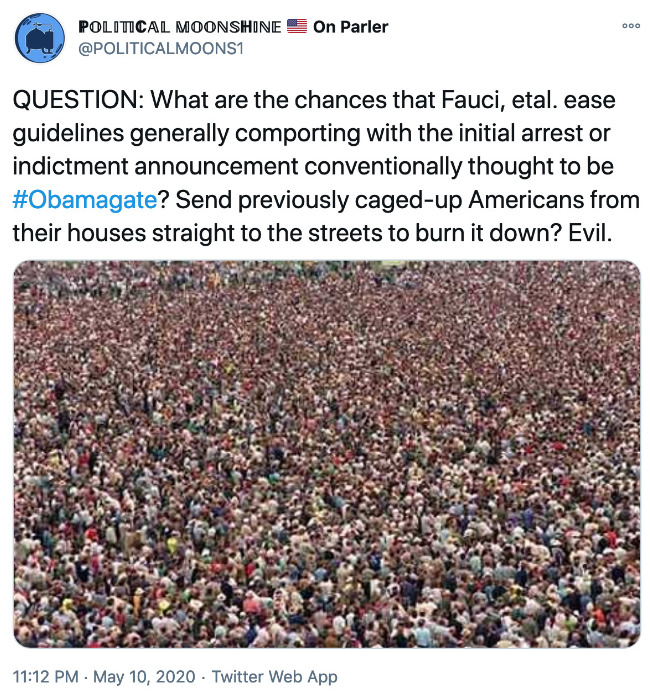 Here are recent headlines relative to the slavery reparations that Harris’s bill introduced, a manufactured and fraudulent “systemic racism” narrative, and actual racism the Biden Administration is now actively engaged in drawing a distinct line between blacks and whites as it seeks to redistribute the nation’s collective tax base along racial lines that excludes those who are not black:

To examine Rep. Jackson Lee’s “white supremacy” bill, the contextual backdrop is critical to understand. That context is found in the entire series The Hunt Is On and is predicated on the following thoroughly evidenced fact set in part extracted from an article in the series: Revisiting the Capitol “Insurrection” Event in Light of New Evidence to Galvanize it as an Entrapment Operation:

There is an ongoing effort throughout the DOJ/FBI to leverage “domestic terrorists”/”domestic terrorism” as a legal vector to trigger legal authority to target profiled individuals and groups comprised of Trump’s people and the silent majority.

The “domestic terrorists”/”domestic terrorism” angles are further tied to fraudulently propagated “systemic racism” and “white nationalism,” which ties further to then-Senator Kamala Harris-D, CA and her earlier legislative effort to provide the precedence for passing legislation to federally fund slavery reparations. All to give the bite more teeth and to create important linkage.

President Trump is their bridge between “white nationalism” and “domestic terrorism”/”domestic terrorists”, which further bridges to his voter base that also primarily encompasses the silent majority. As such, it permits the FBI/DOJ to target those groups.The “domestic terrorists”/”domestic terrorism” vectors as legal definitions will be justified in their application writ large by the indictment and possible arrest of Trump. Technically, it would trigger the authority to target individuals and groups further caught-up by the constructed bridges connecting to “white nationalism,” which are further extended to target and eviscerate the Second Amendment. It will occur by disarming of the same silent majority; especially of the type of weapon that would be sufficient for militia duty like the AR-15. – Political Moonshine

Here’s further elaboration just to be clear and as sourced from another article in this series: There’s A Tale Being Woven for Telling Once They’ve Rewritten History From the Ashes. Do You Know What It Is?:

Gun control/confiscation, white nationalism and domestic terrorist/terrorism are three separate strands from which an entire net is being sewn to be cast around the infiltrators political enemies. Once fully cast, they’ll cinch it up. It’s a literal scheme to frame good people as the scourge of the earth and use that to render them helpless via disarming them.

For the purpose of assigning false culpability, it will all be tied back and to attributed to President Trump, Ultra MAGA and the silent majority. The only remaining question is will the silent majority actually come to understand this and then rise to do something about it? Right now, that mostly passive majority is on a horrible losing streak and apparently helpless to help itself as all of America’s agencies, departments and institutions have been bent back against it.

In short, the application of the “domestic terrorist/terrorism” label invokes emergency authority and unilateral police powers that circumvent regular constitutional governance. Sound familiar? It should. The majority of the enterprise fraud in COVID-19 occurred during the unilateral emergency determinations processes that produce such things as public health emergency declarations and pandemic declarations. Those declarations provide extraconstitutional governance well exceeding firm boundaries and thus equating to tyranny. – Political Moonshine

Our first order of business is putting to rest the manufactured, fraudulent, reckless, and dangerous narrative that the U.S. is systemically racist. First, consider these old Moonshine graphics: 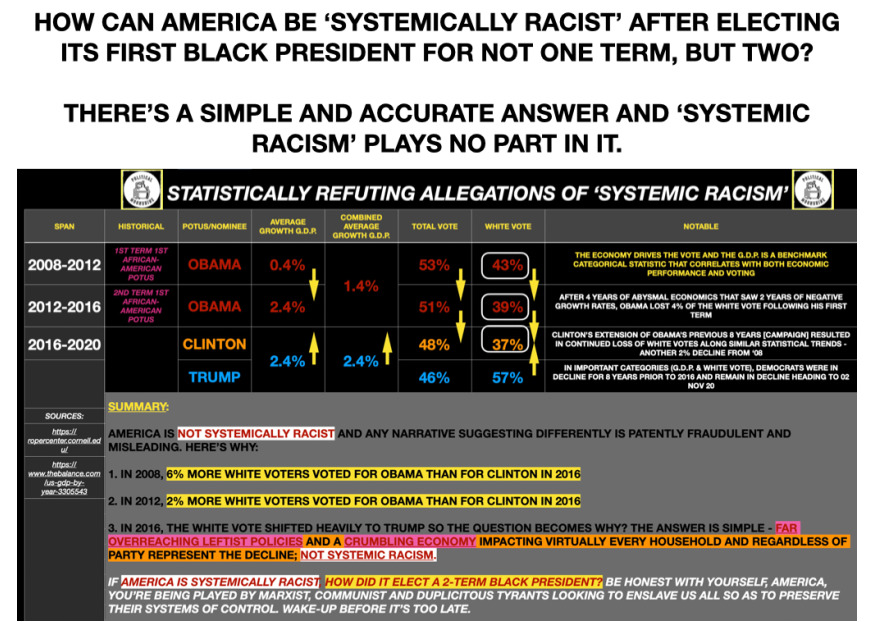 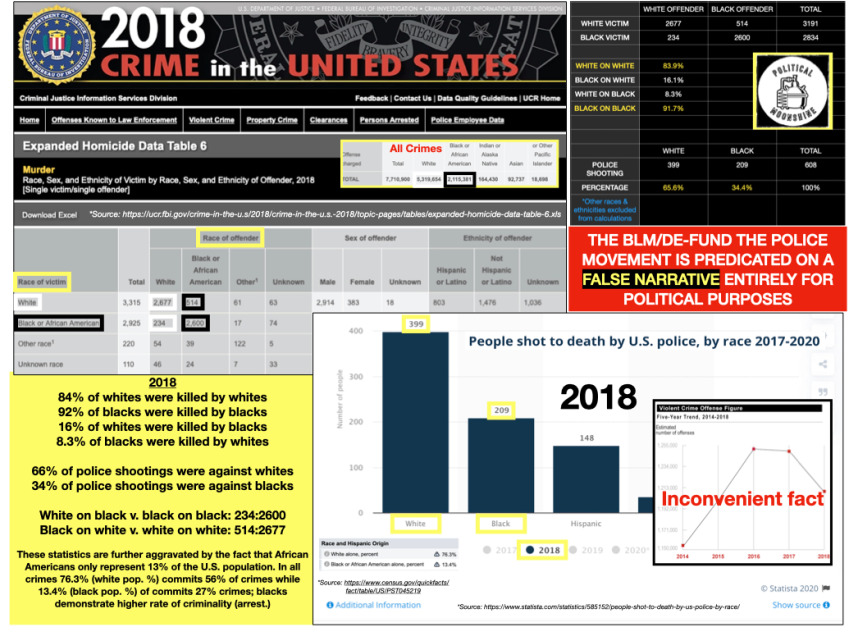 Now consider this video from Bill Whittle discussing the same:

The Bill: “Leading Against White Supremacy Act of 2023”

Our second order of business is examining how Jackson Lee’s bill represents a circle-back to the construct being leveraged to target Trump’s supporters, who represent an illegitimate and communist regime’s political opposition, just as communists historically do. Here’s the full text: 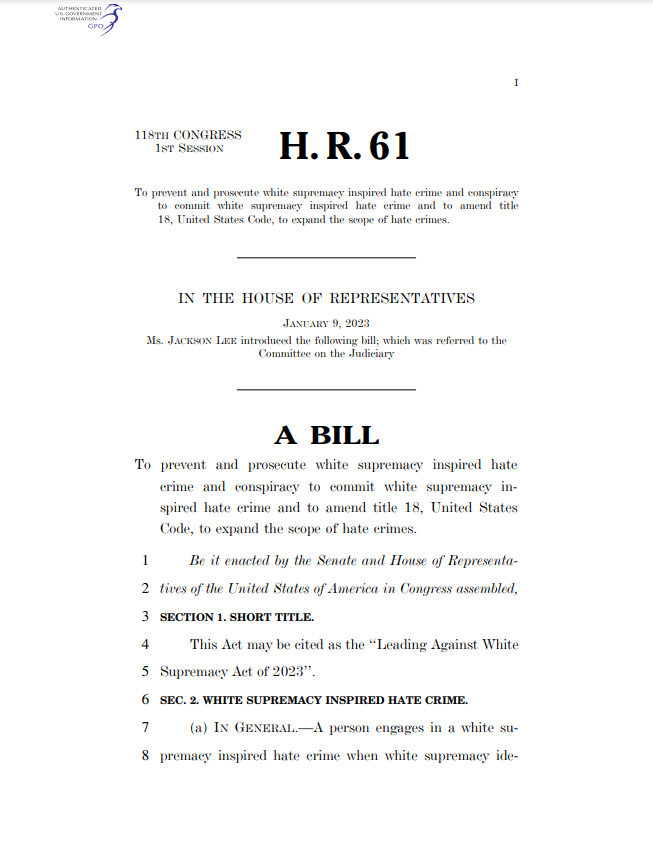 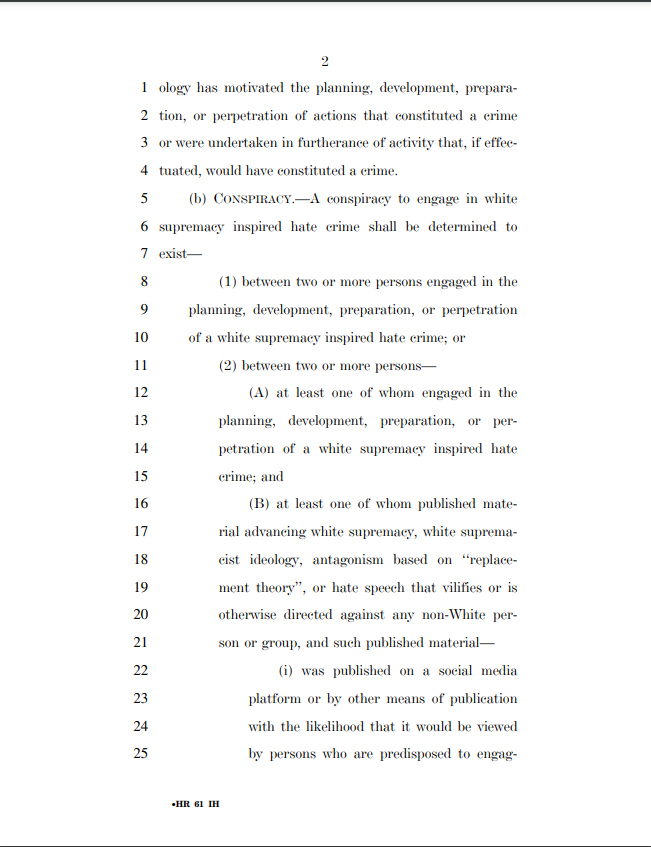 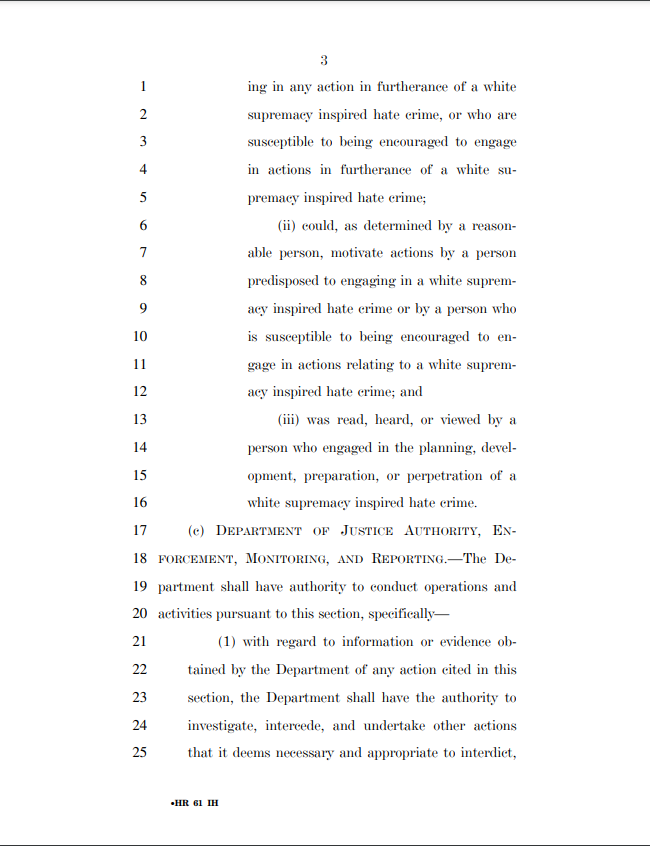 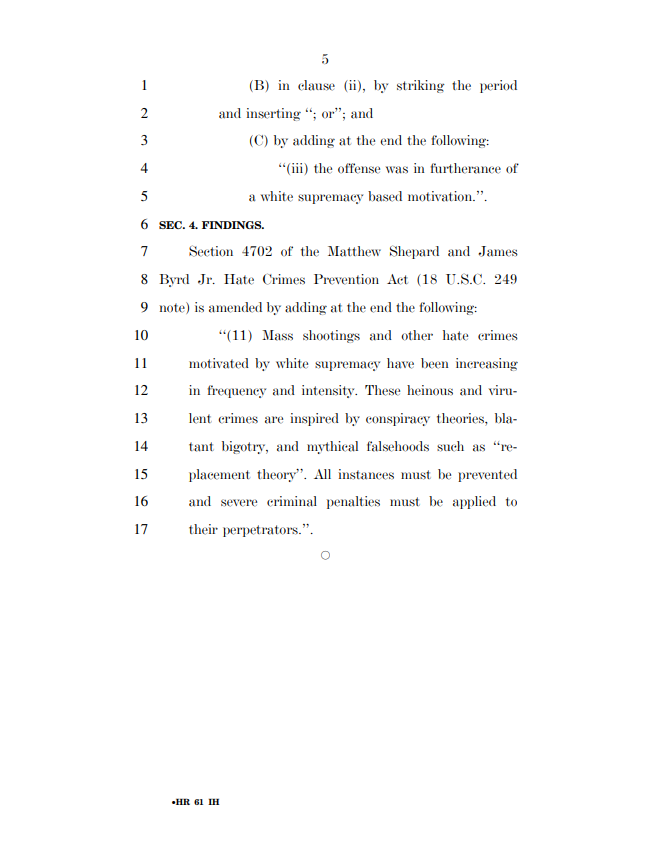 In an examination of the bill, we note the following [emphasis added]:

The spine of the series The Hunt Is On is comprised of “white nationalism” [white supremacy and “systemic racism”], “domestic terrorism”/”domestic terrorist”, the Second Amendment, and leveraging the domestic terrorism/terrorist angles to leverage otherwise extraconstitutional authority to target the Biden administration’s political enemies. Therein, the targeting of President Trump further serves as a bridge to those political targets. Disturbingly and in dystopian fashion, now we see evidence for all of those components directly or contextually within Jackson Lee’s introduced bill.

What it means is that although the evidenced series may be disturbing, by all appearances, that granular analysis is on the mark. If Jackson Lee’s bill is signed into law, it will become a codified and weaponized tool to further target and vector in on Biden’s political opposition with a corrupt and criminal federal apparatus.

This piece was written by Political Moonshine on January 22, 2023. It originally appeared in RedVoiceMedia.com and is used by permission.

The opinions expressed by contributors and/or content partners are their own and do not necessarily reflect the views of DrewBerquist.com. Contact us for guidelines on submitting your own commentary.